Chicago voice teacher Randy Buescher will take your singing to the next level.  You will receive vocal training that is responsible for 3 Tony Award winners, major label recording artists, Grammy, Dove, Emmy winners and American Idol finalists success.  As a voice teacher, Randy has also developed talent that has gone on to major success including Broadway, major tours, record deals, huge competition wins, and scholarships at major universities.  You will not find better vocal coaching in Chicago.  He also has a studio in the Chicago suburbs along with his Chicago, IL location.  Lessons are also available worldwide via the web. 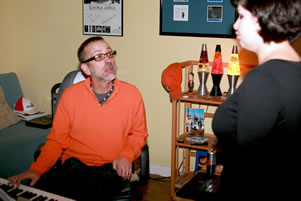 If you are experiencing vocal problems, Randy will help.  He is also degreed in Speech Language Pathology and has done original published research and presented at major voice conferences.  His industry contacts can also help in your career as students have gone on to star in movies and TV.  He works with students of all ages and with people that are serious or just want to get better for there own enjoyment.